A three-round Twitter tournament to decide Britain’s favourite railway station will go live today in the first ever World Cup of Stations.

The online poll will give the public a chance to have their say on which stations deserve to enter the pantheon of world-class transport hubs, by examining how they compare on architecture, impact on the community, and the experience for people using the station, so shops, restaurants and the general vibe.

The tournament will begin today on the Twitter page of the Rail Delivery Group, which represents the rail industry. It ends on Tuesday 15 October. Next Tuesday, Britain’s railway will be celebrating the nation’s 2,563 rail stations on #StationsDay, promoting their role in the community and the people who work in them.

The shortlisted stations range from some of the busiest transport hubs in the country to those providing vital economic and transport links to rural communities. The regional group stage, running from Thursday to Sunday, will see the four busiest stations in 11 nations and regions across the country battle it out for local bragging rights. Monday’s semi-final will whittle the field down to a final four, with the winner on Tuesday crowned the nation’s favourite station.

A wildcard category of four stations has also been selected by vlogger-duo All The Stations from their ‘list of stations too good to miss’. In 2017, All the Stations visited every railway station in Britain meaning few are better qualified to pick out the best of Britain’s lesser known stations. The public will also be able to nominate three of their favourite stations as wildcard choices for the semi-final stage.

The winning station will be presented with a plaque to recognise their achievement, to be presented after the tournament finishes.

“Stations Day is about celebrating stations, their cherished role in the community and the huge investment that has gone into station improvements across the country. With 85% of Brits living within five kilometres of a railway station, the World Cup of Stations is sure to stoke some local pride and hopefully friendly regional rivalries.”

Over the last decade, more than £5.2bn has been invested in improving Britain’s railway stations and regenerating the surrounding areas, from London King’s Cross to Birmingham New Street, Liverpool Lime Street and Dundee. This includes £360m invested in improving over 450 small and medium sized stations around the country. Train companies are also working together to improve journeys by replacing half of all trains old for new and introducing thousands of new services every year.

Vicki Pipe of All the Stations said,

"From huge terminals to the remote request stops and single platforms in the countryside, we know how important railway stations are for communities - creating opportunities and bringing people together. We love that stations are the beating heart of Britain, and we’re excited to see which one comes out on top as the nation’s favourite!"

People can follow the action and vote for the station they want to represent their area in the next round by visiting @raildeliverygrp or searching for #WorldCupOfStations. 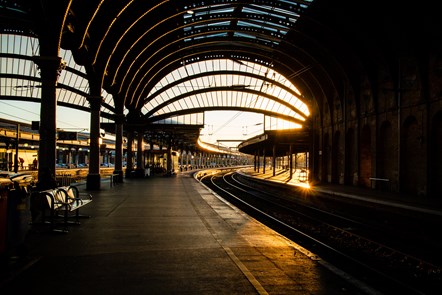