The slow return of commuters to the capital is putting its recovery at risk while other cities bounce back, with London high streets facing the prospect of shut up shops, restaurants and bars.

Commuting into London is lagging behind the rest of the country, with only 41% of pre-pandemic train commuters getting back to the office. Outside of the capital, train commuting numbers have been steadily increasing and are now over half (54%) of pre-pandemic levels.

Train commuters travelling into towns and cities play a vital role in supporting local businesses by spending, on average, £12 on food and drink, £8 on shopping and £6 on entertainment and culture on each journey. Research by WPI Economics for the Rail Delivery Group shows that pre-pandemic, this totalled an estimated £16.7bn a year for the places people love in London. However, the drop in commuting means this now stands at just £6.8bn.

Encouraging more people back onto trains for their commute is vital to boost restaurants, bars and theatres in London that have struggled during the pandemic. If commuting levels caught up to other regions, rising to half of pre-pandemic levels, London’s hospitality sector would stand to gain an estimated £43.5m every week, adding up to £2.3bn over a year.

Although commuting and business journeys by rail are still well below pre-pandemic levels, leisure journeys are recovering more quickly, suggesting that many people feel confident travelling by train. Research by Transport Focus shows nine in ten (89%) passengers were satisfied with their most recent train journey.

To encourage more people to take the train, the rail industry has been running its biggest national marketing campaign in a generation, under the strapline ‘Let’s get back on track’. Rail companies have also worked with government to introduce new Flexi Season tickets which provide a discount for commuters travelling into the office two or three days a week.

Train companies are helping people to travel with confidence by continuing with enhanced cleaning, by ensuring trains are well ventilated with eight out of 10 carriages having systems that refresh the air every six to nine minutes, and by improving information about how busy trains are so that people can avoid the busiest times. Operators are running around 85% of pre-pandemic commuter services into London.

“We all want to support the amazing cafes, restaurants, pubs and clubs that make London such a great place to live and work. Unlike other modes of transport, train travel delivers so much more than a journey for the capital – it connects Londoners to jobs and opportunities, tackles congestion and makes the air in our city cleaner.

“Train companies are doing their bit to deliver a national recovery, including continuing to help passengers travel with confidence by ensuring trains are clean and well ventilated and introducing innovations like part time season tickets. Closing the gap between commuting in London and elsewhere will help level up the country rather than levelling down the capital.”

“It’s no secret that many sectors of the economy won’t return to growth without people returning to city centres. These numbers demonstrate yet again that the central London economy has been hit harder than anywhere else as a result of the pandemic. We must be honest about the uncertainty that faces us this winter and the unavoidable reality that continued short term support for public transport is in the long term economic interest of both the capital and the country.” 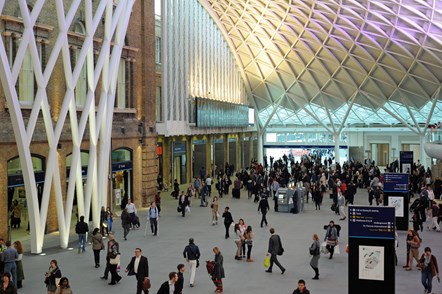