Glasgow Queen Street has been named Britain’s favourite station after winning the World Cup of Stations 2020.

Out of 2,579 stations across the country, Queen Street was shortlisted as one of 48 stations participating in the week-long online poll which recorded over 95,000 votes in total. They saw off the competition in each day of public voting, beating Scottish rivals Motherwell, Aberdeen and Wemyss Bay in the group stages and heavyweights Newcastle and Crewe in the semi-final. Two of this year’s finalists once again thought the path to victory was courting the internet’s substantial cat vote with both Huddersfield and Stourbridge Junction putting their moggy mascots front and centre. But in the end Glasgow Queen Street, coming fresh off a £120m redevelopment, proved too much for them and for London Kings Cross. The 2020 final was a nail-biter coming right down to the wire with Queen Street eventually winning by 0.3% pulling ahead in the last 15 minutes of voting. “We’re absolutely delighted that Glasgow Queen Street has been crowned champion in this year’s World Cup of Stations.

“The recent redevelopment work has revitalised the station, delivering a contemporary building both internally and externally. It’s created a spacious and accessible transport facility that will be a positive and prominent addition to Glasgow’s historic George square for years to come.

“We owe a huge thanks to everyone who voted for us, and to our social media colleagues who really got behind the Rail Delivery Group's campaign to drum up support.”

The competition highlighted the important role that the railway, stations and staff are playing keeping people connected and supporting communities and local businesses during the pandemic.

“For a while it looked like nothing was going to stop Stourbridge Junction and their mascot George the cat, but Glasgow Queen Street played the full 90 minutes and have come away with the silverware. It’s a fitting tribute to the newly redeveloped station and the friendly staff there who have kept key workers moving through the pandemic and continue to support the local community.”

“I am immensely proud of the whole railway family, who have worked tirelessly throughout this pandemic to keep our railways running and passengers safe.

“My congratulations go to all the staff at Glasgow Queen Street for winning this year’s competition. They have played a key role supporting Britain’s recovery from Covid-19, ensuring that key workers and NHS staff can get to work, saving lives.” 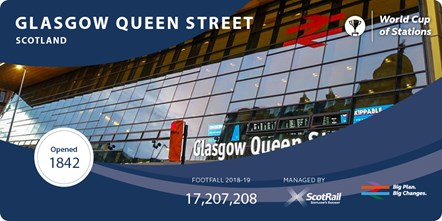 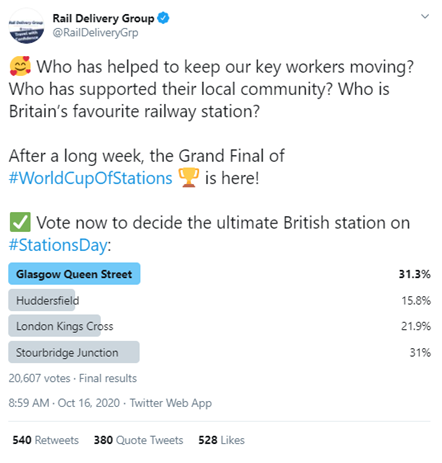