Next year nine operators are introducing new and upgraded trains across the country as part of an industry commitment to replace half of Britain’s train fleet new for old, improving accessibility and journey information for passengers.

Rail passengers across the country are set to benefit from 1,000 extra train carriages next year, with better technology on board to improve journey planning and accessibility. This will grow the nation’s fleet from nearly 15,000 train carriages today to almost 16,000 by the end of 2020.

New and upgraded trains will provide accessibility information to passengers before they pull into stations, tell people where to board and send GPS signals of their exact location, as part of an estimated £20 billion investment in running and upgrading the railway next year.

The nine operators introducing new and upgraded carriages are:

New trains will provide customers with exact information about a train’s location, reducing instances of trains predicted to be on time suddenly showing as delayed. On older trains, their location is only measured when they pass signals, which can be up to five miles apart. In some areas, new technology will also tell people which carriages are emptier using data on footfall and reservations, and even where to stand on the platform to board the train. Operators including Heathrow Express are introducing at seat power, on board TV and faster Wi-Fi.

New carriages will make the railway more accessible for more people, with more trains including information screens with clearer information to help passengers with learning difficulties or visual impairments. The new trains being introduced onto the Merseyrail network feature a sliding step to allow step free access between the platform and the train as well as a number of other innovations, designed in collaboration with customers. New Greater Anglia trains benefit from lower level floors and a retractable step at each door, making them more accessible for wheelchairs, buggies and people with reduced mobility. By 2021, all new trains will show if toilets are accessible and whether they are in use.

“Next year, passengers will be able to track their train, find out where accessible toilets are and even find a seat in the emptiest carriage as 1,000 extra train carriages come on track. New and improved technology will provide better information to passengers and make the railway more accessible to more people as train companies work together to replace half of Britain’s train fleet old for new.”

Data collected by a number of new tech-enabled trains will be used by National Rail to keep customers informed through screens at stations and their phones. Passengers will be able to track trains through TrainMapper, a system powered by Google Maps and enabled by GPS upgrades, which will launch on the National Rail website in the New Year. Passengers can also sign up to receive personalised information, including suggestions for alternative routes during disruption, through Facebook Messenger and ‘Alert Me’ in the National Rail app. 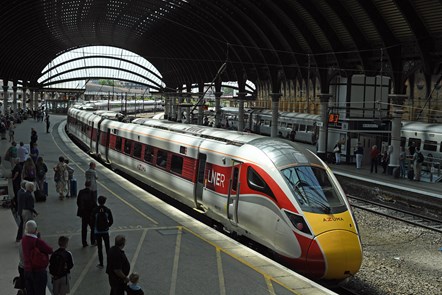