Passenger satisfaction with rail journeys is up three percentage points year-on-year, according to the most recent survey of 28,000 passengers published today by the independent watchdog Transport Focus.

This comes after rail companies have introduced thousands of new trains and extra services.

Scores in some parts of the country remain comparatively low, reflecting poor levels of reliability. Nationwide, however, people are more satisfied with around half of the aspects of their journey about which they were asked. No categories saw a statistically significant decline.

The rail industry has made a series of improvements which are reflected in higher satisfaction scores. These include:

Nationally 82% of journeys were rated as satisfactory overall, an increase of 3 percentage points compared to Autumn 2018.

Responding to the headline scores in the survey, Robert Nisbet, Director of Nations and Regions at the Rail Delivery Group, said:

“While we are working hard to address challenges on some routes where train punctuality should be better, today’s improved satisfaction scores show that passengers are feeling the benefits of investment in thousands of new carriages and extra services. Punctuality is stabilising on many routes and passengers will continue to see their journeys improve as we replace half the train fleet old for new by 2025.”

On value for money, Robert Nisbet, Director of Nations and Regions at the Rail Delivery Group, added:

“We know people want better value for money and have put forward bold proposals to government for a new fares system which will help to deliver this. We look forward to seeing the outcomes of the Williams Review and working with the government to create a railway that is more responsive to what passengers want in all areas of the country.”

Passenger satisfaction with value for money remains low at 47%, compared to 46% last year. The rail industry is calling for reform to the fares system, which would enable them to offer better value fares. Last April, rail companies published proposals to government to update regulations which underpin the fares system and date back to the 1990s. These proposals would make ticket buying easier, enable the roll out of ‘tap-in, tap-out’ pay as you go across the country to potential save money for commuters working flexibly and travelling off-peak, and provide a better range of walk-up fares for long-distance journeys.

An easier fares system could also underpin structural reform of the railway. Britain’s rail companies are proposing a radical alternative to the current franchising system that would better join up the railway, improve accountability with a new organising body in charge and ensure different types of services are designed to suit the needs of different groups of passengers.

Delivered in full, this plan opens the door to TfL-style concessions in more cities across the country, with customer-outcome based contracts on other parts of the network, operating to passenger-centric targets. These would be complemented by some long-distance routes offering more competition and choice for the customer. In all cases our plan would be underpinned by a modernised, reformed fares system with tap in tap out and a price cap in urban areas, matching the way people live and work today.

The new system would be overseen by a single organising body, independent of government and industry, ensuring decisions about trains, infrastructure and services are more joined up. It will ensure the railway keeps its promises to its customers and all players are held to account. 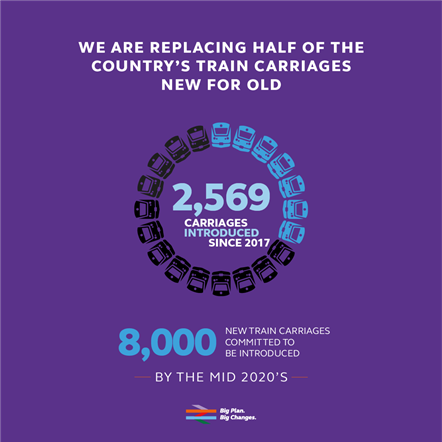