Rail companies are working together to deliver their plan for the government’s Christmas travel window, between 23 and 27 December. This includes maximising space by running more and longer services where possible, providing improved travel information and travel alerts, and extra staff on hand at busy locations to help people with their journeys.

With all long-distance train companies now selling tickets for the Christmas travel window, passengers are being asked to plan ahead, avoid busier times and make reservations for both their outward and return journeys, where these are offered. Elsewhere, the impact of the pandemic means services on some routes are currently being finalised and people are being asked to check their train operator’s website for the latest information.

Although the vast majority of the network will be open for business in the run up to Christmas, planning ahead is particularly important for those travelling on Boxing Day when there will be a limited service. London King’s Cross station will be closed between Christmas Day and 30 December and passengers are being told not to travel to and from the station.

The government has also waived change of journey admin fees for advance tickets purchased before new Covid-19 tiers were announced on 26 November, enabling fee free changes and ensuring passengers are not left out of pocket for complying with the new restrictions.

As part of the industry’s safer travel pledge, rail companies are taking steps so that passengers using the network can travel with confidence, including cleaning more frequently and using powerful, long lasting, anti-viral products. Passengers should also wash their hands regularly and wear a face covering, unless exempt.

“Christmas will be unusual for many and rail companies are doing all they can to bring people together during the government’s travel window, but this year more than ever we’re asking people not to turn up at a station and hope for the best. If people follow the advice to plan ahead and book outward and return reservations for longer journeys, alongside the extra cleaning, better information and additional carriages that are part of our safer travel pledge, everyone should be able to travel with confidence.”

Over £2.8bn has already been invested to improve the rail network during the pandemic when passenger numbers were lower, to minimise disruption while still keeping communities connected.  Whilst many Christmas works have been postponed, some are necessary and will need to go ahead. However all efforts have been made to organise replacement transport in the form of buses and coaches so people can still reach their final destination safely.

“Our frontline workers have continued to work tirelessly throughout the pandemic to maintain and upgrade the railway for those who need it and this festive period will be no different, with thousands of workers out delivering significant improvements across our infrastructure.

“It is vital that we drive improved rail performance through targeted investment work so that the railway can continue to play its part in Britain building back better from the Covid-19 pandemic.”

While the vast majority of the rail network will be unaffected by engineering works over the Christmas and New Year period, some upgrade projects are taking place, including:

Passengers can find out how their Christmas journeys will be affected with their train operator, via National Rail Enquiries, or by following #ChristmasRailWorks on Twitter. 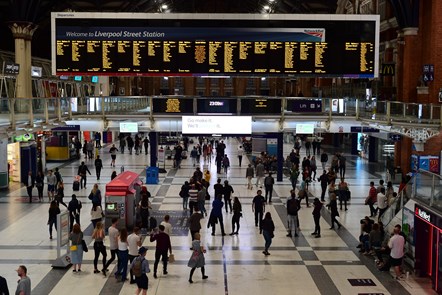