Susie was Customer Service Director for the company, which developed and launched the operation of the new light rail network in July 2014.

She was based in Australia for the last decade. Before then, she worked in Britain’s rail industry for Network Rail, National Express, Thameslink and Northern.

As Director of Planning, Engineering & Operations she will lead the RDG’s work to efficiently deliver and improve the railway today, while planning for the railway of tomorrow. Her team works with rail companies to continuously improve today’s railway, particularly in terms of safety, wellbeing and reliability, and to plan and deliver a more diverse, sufficient, sustainable, high capability railway.

“I am delighted to be back in Britain and working in the railway at a time of great change, including major improvements being delivered now and in the longer term.

“I look forward to working with colleagues across the railway to improve performance as we introduce thousands of extra services every week while at the same time ensuring the industry structure is right for the next generation.”

“Susie has a wealth of experience working in the transport sector, particularly rail and light rail, and I’m very pleased that she has joined the RDG.”

Q: You worked in Australia for the last 10 years. What made you want to return to Britain, and work at the Rail Delivery Group?

Susie: I was very comfortable in my old role with KDR Gold Coast. I joined during the construction phase of the project, ensuring that the system would operate well and run smoothly for customers. The project then transitioned to operations, involving recruitment, training and mobilising teams from day one.

Once it was settled, we focused on ensuring that people were developed and delivering a good service for customers. The network worked so well, it was extended ahead of the Commonwealth Games in 2018.

My ten years in Australia was a time of continual change, which kept me very engaged and I stayed there probably longer than I usually would. Towards the end of my time there, after the extension, we successfully supported the Commonwealth Games, we were hitting our KPIs and the team were performing very well. It got to a point where I wondered whether I was required anymore!

There were a few different opportunities available to me and the role at RDG really piqued my interest. It’s a time of great change and challenge for Britain’s railway. Importantly, there’s a will for change across the industry too. I asked myself a lot why I was leaving the beautiful gold coast and returning to England and I realised it was the challenge. I’m not the kind of person who likes to be settled – I needed a new challenge.

Performance of the railway really matters to me; the railway is in my heart as well as my work and my work is a huge part of my life. It was an area I worked closely on when I worked in the UK previously and I’m really keen to see improvement. I want everyone to be proud of our railway.

Q: What change to the railway in the last 10 years has jumped out at you since you returned?

Susie: As well as a lot of change in the rail industry, the country is also going through a lot of change. I kept in touch with UK news while I was living in Australia and I was also getting updates about the industry through LinkedIn. But it’s hard to grasp from afar what the change means and feels like.

A lot of the industry structures have remained the same, or are very similar, since I was last working in the UK.

What is clear is that there are a lot more services running on the network, but the network remains the same. There’s a need to harness technology a lot more to help us deliver better services for customers.

Q: The railway is going through a lot of change at the moment. What are your priorities?

I have four priorities at the moment. Firstly, improving train service performance by working with train operators, Network Rail and other key stakeholders to understand the causes of the issues, share best practice and get plans in place for everyone to deliver against. This can be done nationally and regionally.

Secondly, the industry is introducing thousands of new carriages at the moment and at the same time cascading existing trains to other routes. We need to ensure this is well joined up across the industry and people are working together to enable commitments to improve our service to be met.

Third, I want to use this time now to meet and listen to stakeholders, within and across the industry and outside of it, to understand the role RDG currently plays and how we may be able to help and improve.

Finally, as a manager and leader, I want to make sure I am enabling my team so that we are best able to deliver for customers on behalf of our members.

I think we have a real opportunity to shape the future.  With the outcomes of the Williams Review and the current will for change, there is a time for the industry to be able to make some significant leaps forward with technology implementation and simplification.

Q: What would you like to achieve in this role?

Susie: I want to contribute to better performance - more trains running on time – and then getting to a position where this is sustainable and we are being much more forward facing, so that we don’t have to manage issues once they’re happened.

More can be done at the RDG level to bring out possible issues and ensure they are well addressed. There is an opportunity to take a programme approach to delivering improvements across the industry. There is a will for this, and the Williams Review means that rather than this management being done at a government level, it could be managed by an arm’s length body.

Q: The rail industry is very male dominated. Rail companies are doing more than ever to encourage more women and other minority groups into the industry. As a woman leader in the industry, what do you think needs to be done to improve this further?

Susie: We need to look at how we recruit: where are we recruiting from? What facilities do we have? Is it what people expect in their professional environment? What resonates with them?

The positive thing is that there is a team of people within the RDG looking at this and identifying what needs to be done at a RDG level to support the industry. It’s about more than tactical changes though, it’s about culture and leadership too. Clear leadership and development helps ensure people that join the industry can see a career path ahead of them.

Some of our strengths are also our weaknesses – we see people working in rail as a family, but if we keep on recruiting from within the family, nothing will change.

In general, what motivates you in life?

I like challenge and competition, including helping others to succeed. I am a team sport person, rather than individual, so I like working with people to achieve something.

Are there any leaders who you really admire and why?

There are people in the rail industry that I have looked up to and have guided me. To me, its about people who have shown great leadership, like Dyan Crowther and Ray Price.

When I think of who the most influential person has been, I think of my grandma. She was an independent lady and my grandfather died quite young. She brought up two children. She was educated and she made sure her children were educated too. She encouraged all of us to understand what is possible, educate ourselves (such as through visits to museums) and to remove barriers for ourselves so that we can succeed.

You control your frame of mind. 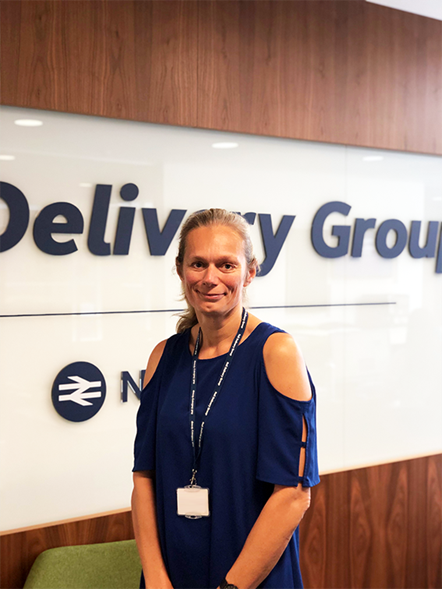