Scotty’s Little Soldiers, the national charity that supports children of servicemen and women who have lost their lives, will be giving over 170 bereaved British Forces children from all over the UK a reason to smile this weekend when they attend a very special Christmas party in London.

The Rail Delivery Group, representing train companies and Network Rail, has teamed up with Scotty’s Little Soldiers and offered 400 commemorative rail vouchers for the children and their surviving parents to travel from all over the UK to attend the exclusive event.

Founded by war widow Nikki Scott in 2010, Scotty’s Little Soldiers was set up in memory of Nikki’s husband and father to her two children, Corporal Lee Scott, after he was killed in Afghanistan in 2009. Scotty’s Little Soldiers provides a network of support to children and young people who have lost a parent who served in the British Armed Forces.

This year alone the charity has supported over 400 bereaved Forces children across the UK, providing access to the very best health and wellbeing support, outstanding development opportunities and a chance to smile again.

Scotty’s Little Soldiers’ annual Christmas party is a highlight for many of the children who continually face challenges as their grief affects them in different ways as they journey through life without their parent. Whilst the focus of the party is creating a fun, memorable experience at a difficult time of year for many, all the activities have been designed with bereavement charities and childcare professionals to encourage wellbeing, confidence, communication and team-working - areas of identified challenge.

Nikki Scott, Founder of Scotty’s Little Soldiers, said: “We really can’t thank the Rail Delivery Group enough. The Christmas party is such an important event that means so much to the children we support, but of course to get families from all over the UK to London is such a huge cost for a charity. This amazing gesture from the rail industry is so appreciated. Not only has it saved us a lot of money, but it has also made organising the event easier. Thank you!”

Paul Plummer, Chief Executive of the Rail Delivery Group said: “We are proud of the role that the railway plays every day in bringing people together from right across Britain. Nikki and her team are doing something truly amazing in bringing together families, who have suffered terrible loss, to create happy Christmas memories. We are delighted to support them in delivering some festive fun this Christmas for the families of service personnel who have made the ultimate sacrifice.”

For more information on Scotty’s Little Soldiers, go to www.scottyslittlesoldiers.co.uk

For more information on Rail Delivery Group, go to www.raildeliverygroup.com 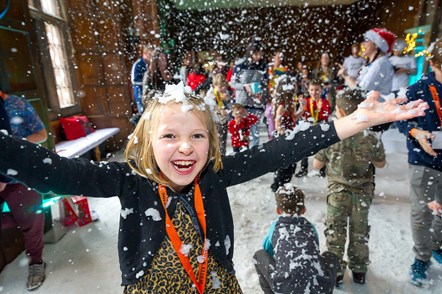